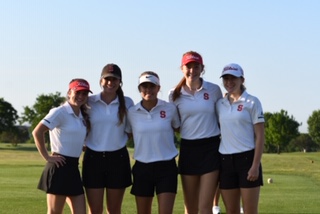 Behind after round 1, the girls improved their score by 11 strokes from day one to put themselves into medal contention. Once it was all said and done, the girls finished in 4th place, missing a medal by 4 shots. The Lady Eagles were led by Taylor Rich and Maddy Bourland who both shot a two day total of 167. Senior Avery Hyer shot 174 followed closely by Averie Piatt’s 179. Priscilla Torczynski, playing in her first state tournament shot 193. This was the third year in a row for the girls team to compete in the state tournament. Previous finishes were 8th and then 6th.