On Thursday, the Lady Eagles kicked off the Midlothian Heritage “Frostbite” tournament with a 4-0 win against 2-time state champions Kennedale. Goals were scored by Hannah Reavis (2), Madison Spradlin, and Holly Wright. Mackenzie Miller, Madison Spradlin, Sam Vargasand Holly Wright recorded the assists. Allison Carnahan and the Lady Eagles defense didn’t let Kennedale get close to the goal, helping the team keep possession the entire game. “We finished our shots very well and kept them from shooting the entire game,” says Sam Vargas, who helped both the offense and defense keep the ball under control. Avery Wright recorded the shut out.

In their second game of the day, the Lady Eagles fought hard against Midlothian Heritage, the 2018 defending state champions, but came out with a 4-0 loss. The Lady Eagles were close to scoring but struggled to get the ball in. Avery Wright made many great saves despite the score.  The Lady Eagles will come back stronger today as they take on Athens in game three on Friday. 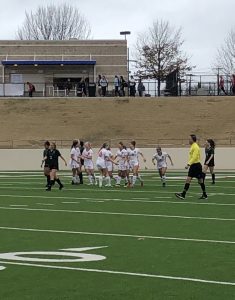 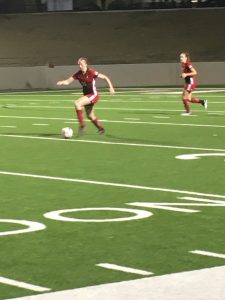