The Lady Eagles 8th grade A team lost a hard fought battle in 3 sets to the Lady Mustangs. The Lady Eagles played a great second set, beating the Mustangs 25-23. Player of the game was Bri Waters with great kills and a pair of blocks at the net.

The Lady Eagles 7th grade B team played hard but fell short against the Lady Mustangs in two matches. Lauren Allison was player of the game with her aggressiveness at net. The Lady Eagles are ready to practice hard this week and go into next week’s game with a positive attitude!

The Lady Eagles fought hard to take back the match against Marble Falls, but never fully gained the momentum in their favor. The 8th Grade B team lost in a two set match to Marble Falls. Caitlyn Kasper’s leadership on the court with her confidence and solid passes contributed to the Lady Eagles’ competitive match. She earned player of the game for this impressive effort. 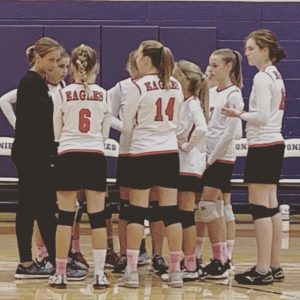