In Salado, Abby Molyneaux scored midway through the first half to give the Lady Eagles a lead.  However, the Lady Badgers tied the score on a well placed free kick early in the second half of the game.  Maddy Wade had three saves.

In JV boys action, the Eagles handed a 3-0 loss to Lampasas to end the 2017 season with a decisive win.  Goals were scored by Matthew Maldonado, Brian Chavez, and Andrew Ramirez.

Coach Cruddas, Coach Lemus, Coach Goos, and Coach Ewton would like to thank the parents and players for an outstanding season. 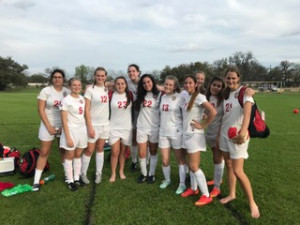